Spring had officially sprung and being that here in the UK it is Easter Monday today I thought I could spread the spring joy, only without the chocolate that we all know is the best bit! I found this post at Kyera’s Library and thought I should do it.

HOW IS SPRING WHERE YOU LIVE?

Scotland is predominantly rainy all year round, spring is no different only there tends to be wind thrown in for good measure too. Today is 8°C which is 47°F for everyone who is interested – today is a pretty average Scottish Spring day.

MOST ANTICIPATED BOOK RELEASE THIS SPRING?

Always Never Yours by Emily Wibberley and Austin Siegemund-Broka
which comes out on May 22nd.

Megan Harper is the girl before. All her exes find their one true love right after dating her. It’s not a curse or anything, it’s just the way things are, and Megan refuses to waste 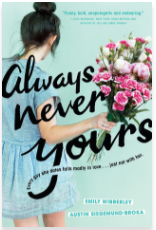 time feeling sorry for herself. Instead, she focuses on pursuing her next fling, directing theatre, and fulfilling her dream school’s acting requirement in the smallest role possible.
But her plans quickly crumble when she’s cast as none other than Juliet–yes, that Juliet–in her high school’s production. It’s a nightmare. No–a disaster. Megan’s not an actress and she’s certainly not a Juliet. Then she meets Owen Okita, an aspiring playwright who agrees to help Megan catch the eye of a sexy stagehand in exchange for help writing his new script.
Between rehearsals and contending with her divided family, Megan begins to notice Owen–thoughtful, unconventional, and utterly unlike her exes, and wonders: shouldn’t a girl get to play the lead in her own love story?

WHAT BOOK COVER MAKES YOU THINK OF SPRING?

Casting Shadows (Flynn #3) by Sophie McKenzie – the cover is just so nice and springy:

WHERE ARE YOU GOING TO READ THIS SPRING?

Hopefully a lot more than the past couple months but probably won’t happen. But I am definitely going to be reading The Sight of Demons by Darin C Brown because I really need to get round to it but studying had totally killed the reading vibe.

FIND A COVER WITH THE SUN ON IT!

WHAT ARE YOUR FAVORITE SPRING READS?

I don’t really have any books that are spring themed or that are set in spring specifically…at least I don’t think so. Maybe I should start it this year – any recommendations?

FIND A BOOK WITH MANY DIFFERENT COLORS ON IT.

Chasing the Stars by Malorie Blackman

Also, I tag anyone who is interested because this is nice and simple and cute and yeah – kind of fun. I might do the same questions but for each season? What do you think?

That’s today’s spring post – Spring probably isn’t my favourite season just because it now connotes stress and studying for myself, but I have nothing against the season specifically. I really hope I can keep up these daily posts but I have a feeling that it won’t happen and it will drop back down to Mondays, Wednesdays, Fridays and Sundays but who knows.