Hi,
So the years coming to a close and I thought why not slip in a cheeky wee review before the year is out.
I did a Blitz on this book a couple of months back and I had all the intentions to purchase it myself however, I was offered it in exchange for an honest review courtesy of YA Bound Book Tours. As always all thoughts and opinions are my own and if I genuinely disliked something about the book I will say. 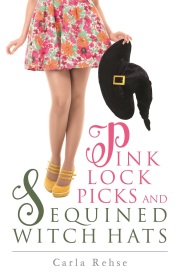 While attempting her inaugural break-in, Gracie blacks out and wakes up far away from the scene. It turns out she accidentally intruded on a male witch’s “circle of power,” and now she’s bonded to him for life.
Gracie quickly learns that dissolving the bond with Asher, admittedly a very handsome and charming witch, is more complicated than she initially thought. To break the bond, Gracie must delve deeper into a society of witches that involves a secret club, a shadowy council, and all sorts of magical mischief. And right when it seems things can’t get any worse, witches start turning up dead.
It’s clear that Gracie is out of her depth as her quest to sever the bond magically turns into a murder investigation. But if Gracie and Asher don’t quickly uncover the killer, they might be next on the list.

The blurb is a good indicator of the book. The plot is exactly as described there only better. I really enjoyed the premise behind this book and it had me from the word go or whatever the first word actually was.
I found the witchy jew jew stuff easy to follow and not as if I had just been thrown into a shortened history lesson, AGAIN meaning I was always interested in what was happening and no boredom or annoyance set in.
Overall, great plot line and very immersive.

Writing Style:
Carla Rehse has a nice writing style. I wasn’t annoyed by it but I wasn’t so blown away that I could differentiate between hers and someone else I thoroughly enjoyed. There was the odd moment of humour which came across well, I did like how it wasn’t every line – it was well chosen and significantly placed.
I loved the way she wrote her characters. She managed to get the perfect Queen Bee image and persona for Gracie while also making her bearable to read. I adored reading her because of her switching between the two versions of herself.
No complaints here.

Characters/Relationships:
As I have briefly mentioned I loved both Asher and Gracie. So them together is literally perfect, although their relationship was so unbelievably obvious and stereotypical I fell hook line and sinker anyway purely because of the chemistry between them.
Asher was the perfect gentleman crossed with your hillarious best friend. He is by far my favourite character because he is so stubborn I related to him a lot (LIKE ALOT ALOT) and the parts with him made me happiest.
I also have mentioned that I loved Gracie. She was so well written that you couldn’t not love her. Full honesty – I hated her to start off with. She was so annoying and the stereotypical queen-bee-mean-girl who was so far up her own backside she was the right way round again kind of character that I just can’t tolerate.
And then she met Asher.
And you met the real her, not the fake persona she put on to destroy lives but herself and that was when I fell in love with this book because I realised that anyone who can make me go from despising a character that greatly to loving them in an instant must be worth something.

Normally I would have a section on the parts I didn’t enjoy but I literally have none for this. I love it. It is up there with my favourites of the year and I can’t believe I got this in September but put off reading it till December.
I COULD HAVE HAD A WHOLE TWO MONTHS OF FANGIRLING OVER ASHER THAT I DEPRIVED MYSELF OFF.
Anyway, I presume you can guess that this is a 5/5 star book for me and I can’t recommend it enough. Give it a read if only for Asher becuase he is so worth it. 😉

That’s all for the review, I hope to have to end of year wrap up type things up the next couple of days *fingers crossed*
Also fair warning – I have my prelims in January so if my posting gets anymore infrequent or I start having a breakdown mid post you will know why.